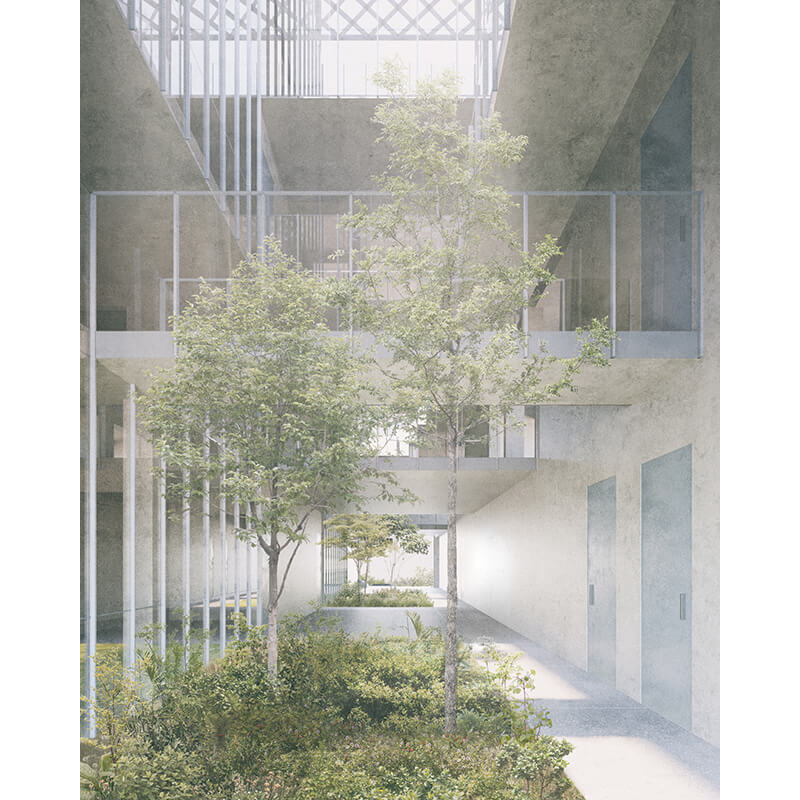 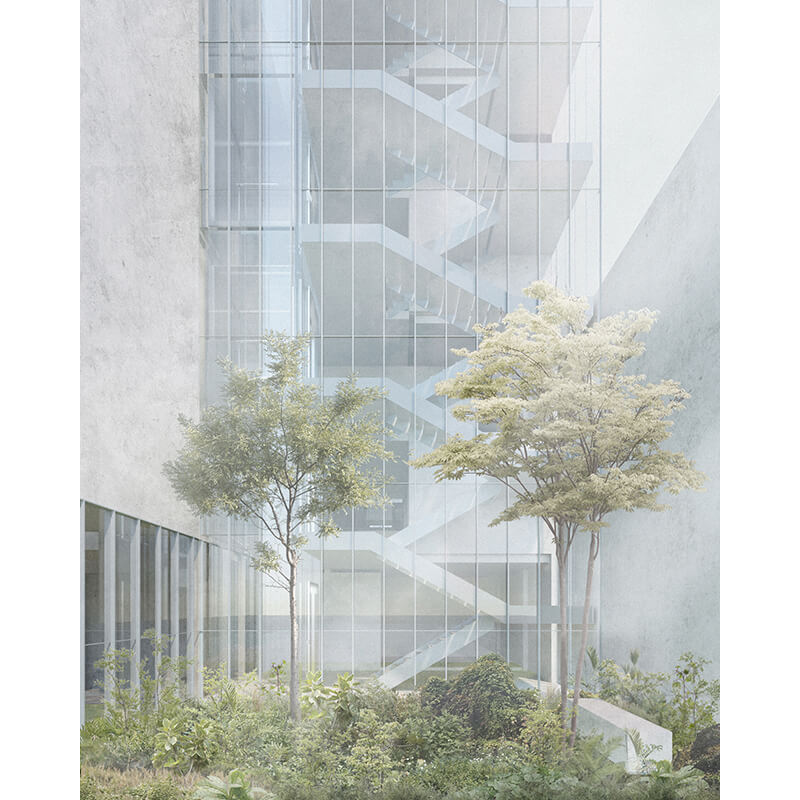 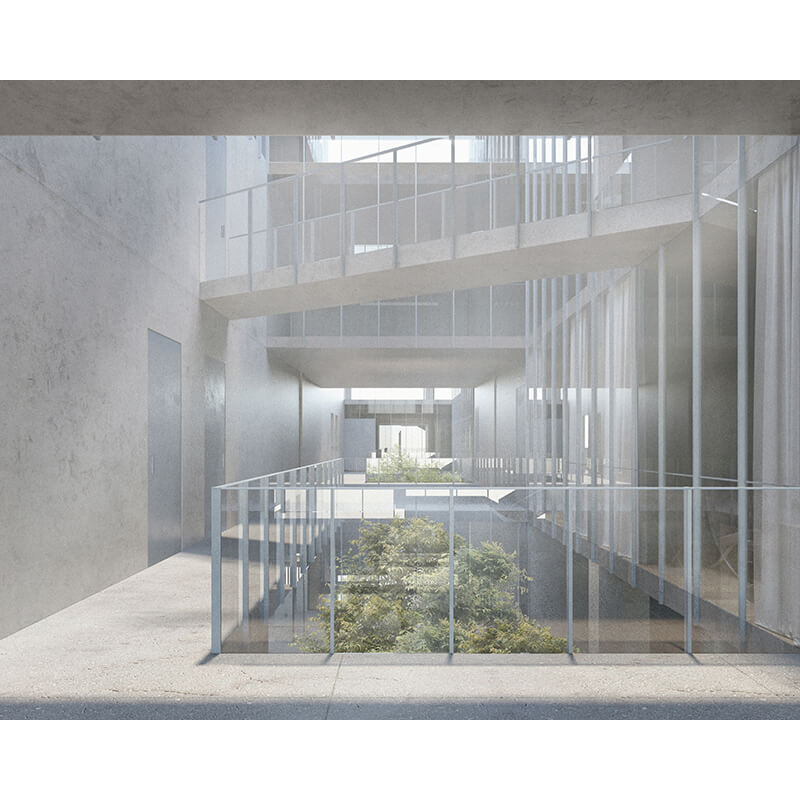 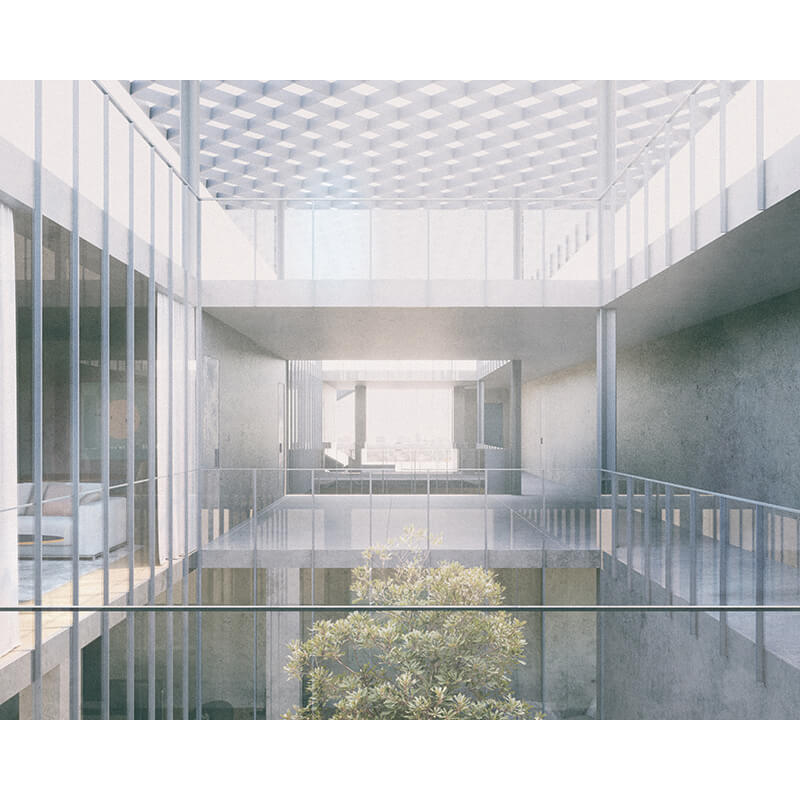 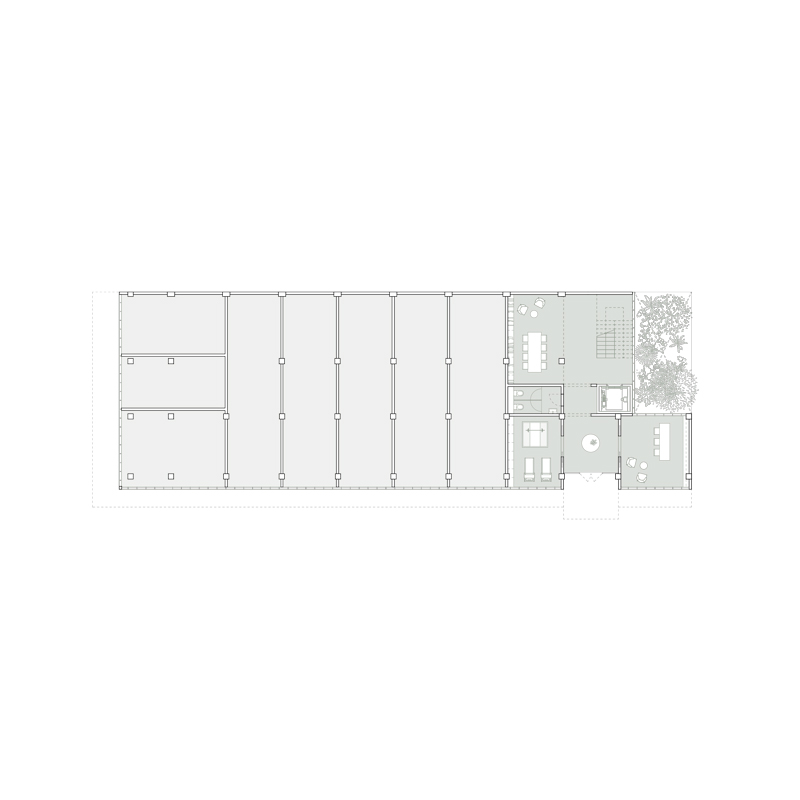 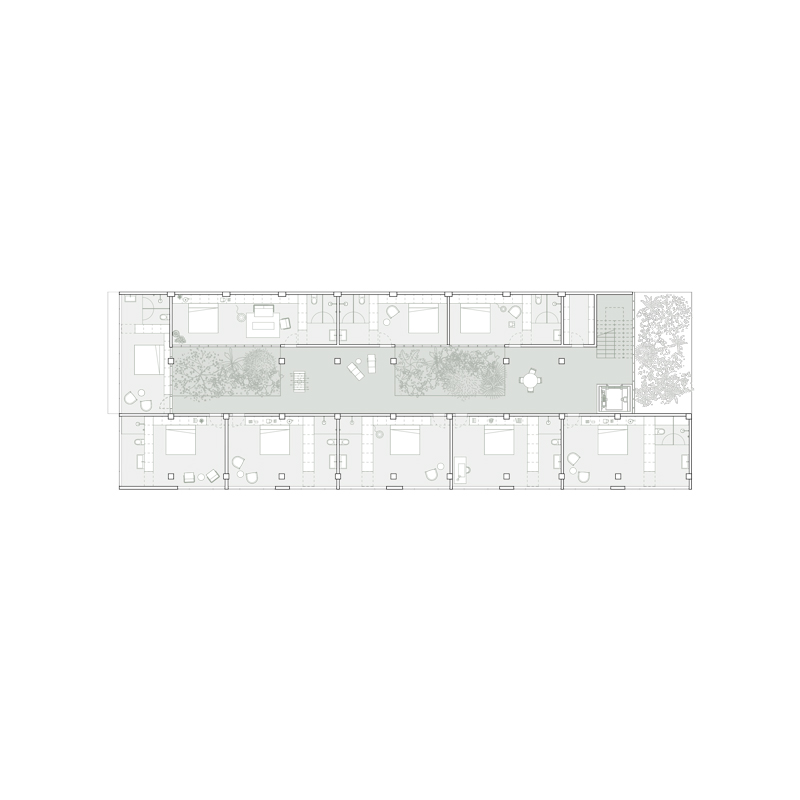 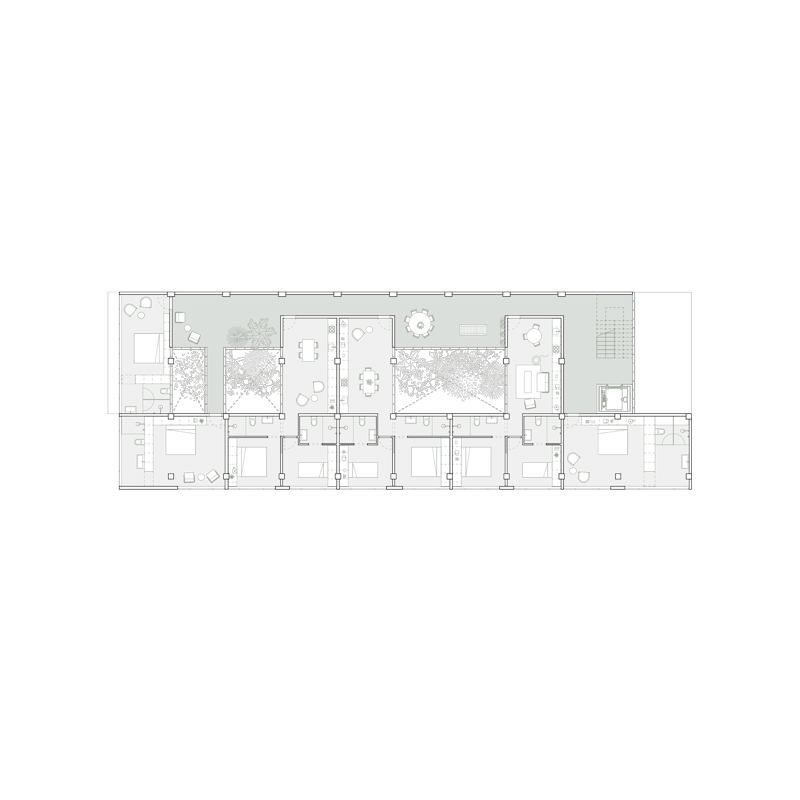 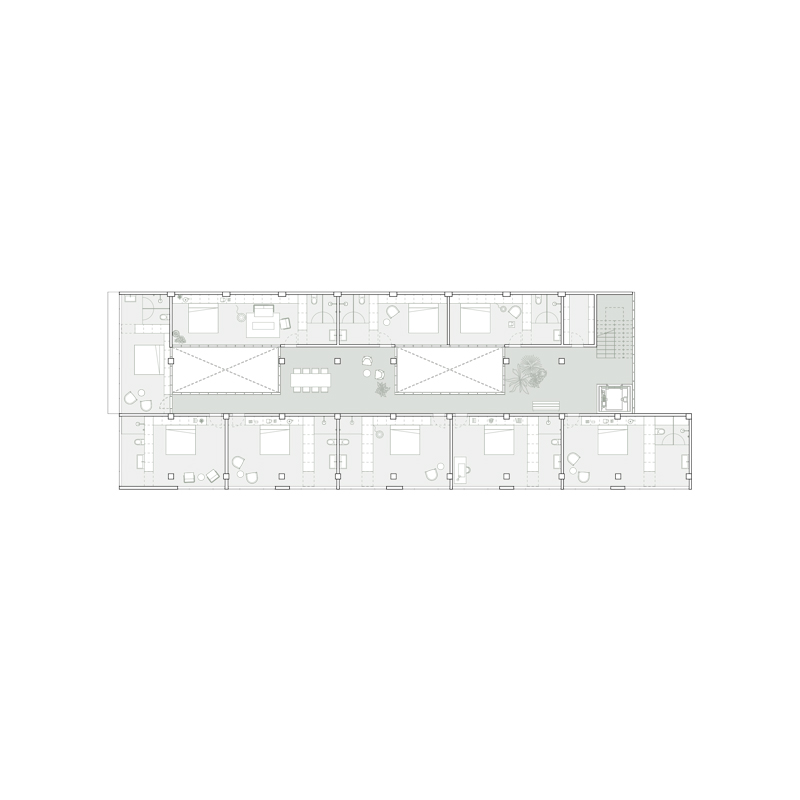 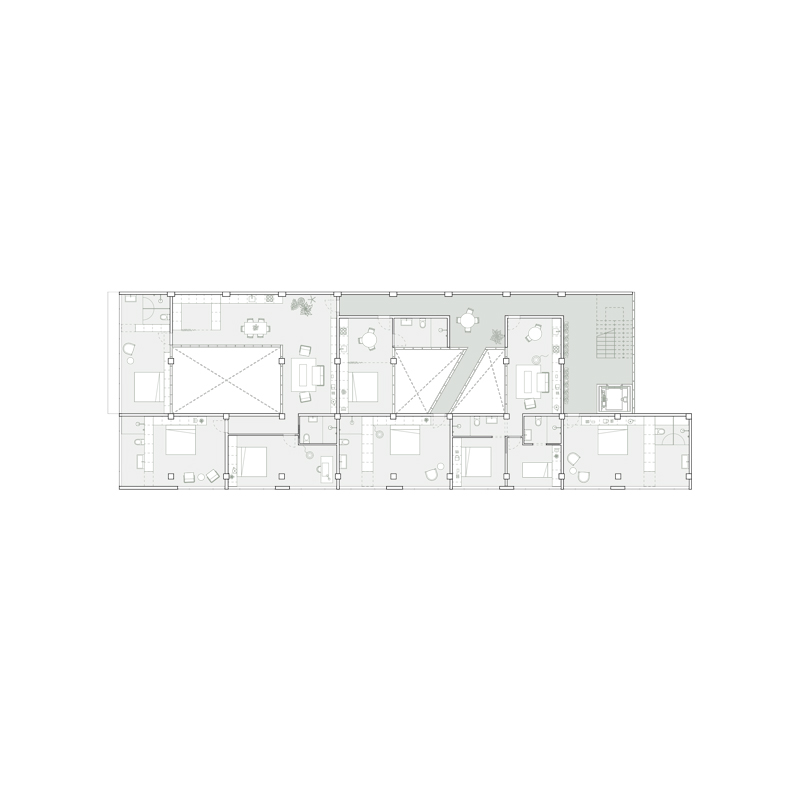 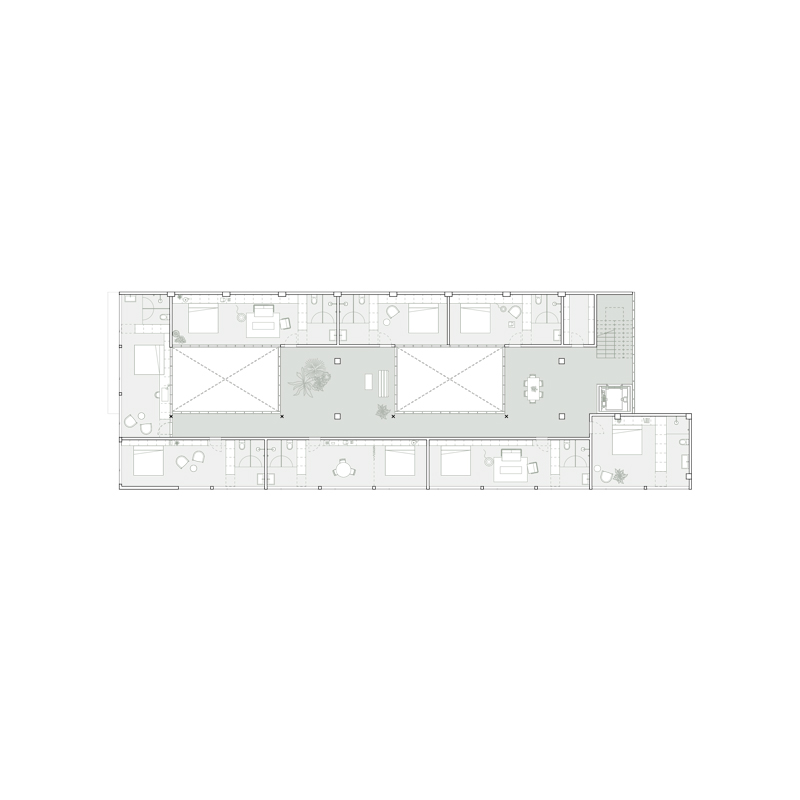 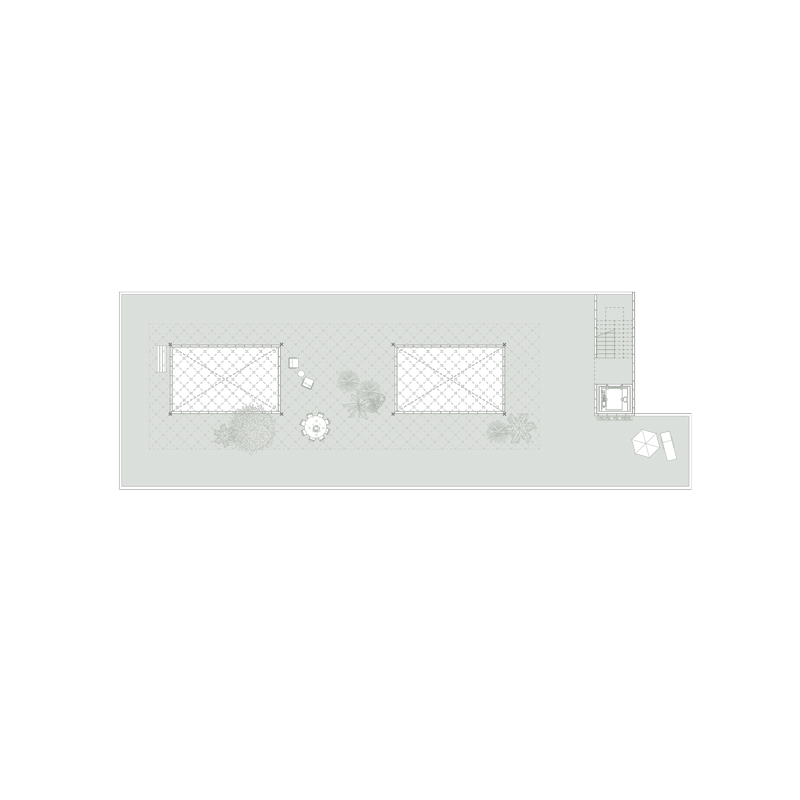 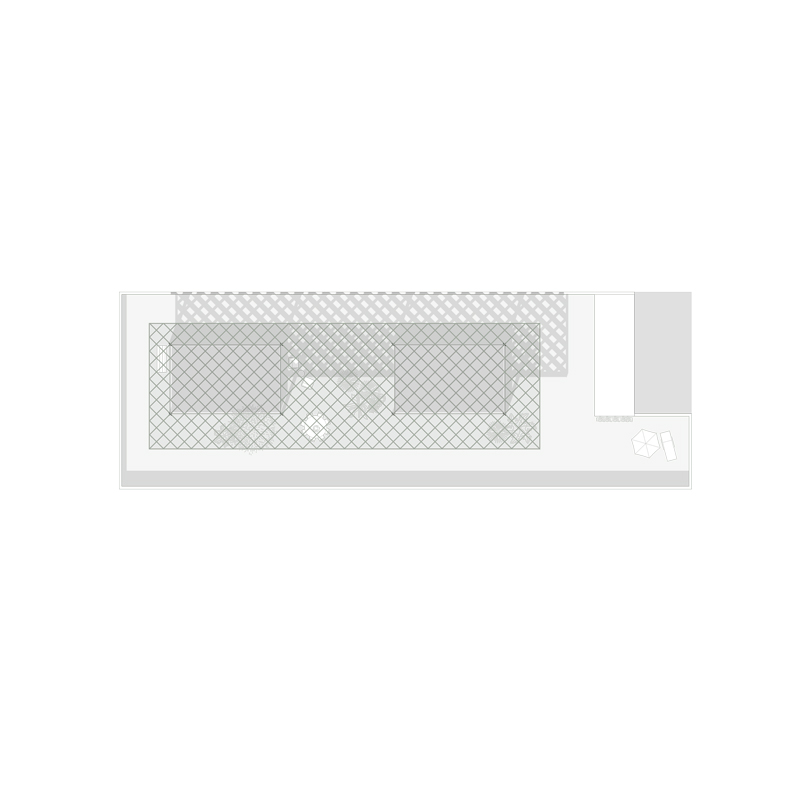 The existing five-storey building is located near to a plaza in the Roma district. The small tree-lined Plaza is surrounded by lively avenues. At the same time, the Plaza is set back from the busy streets and therefore hidden, so that the adjacent street of the Guaymas project is conveniently quiet.

The existing 1960s building appears notably unembellished in the colourful surroundings. Influenced by the architectural language of its time of origin, the façade was adorned by surfaces with dull colours. It is only at a second glance that the valuable qualities of the building become apparent: the proportions of the two main façades are balanced and surprisingly contemporary in design. The plain elegance of the exterior design of the building will be accentuated by a new materialization. The window grid will be retained for the new windows, apart from the heightening of the window band on the top floor. The residential building will have a fresh and inviting appearance after the renovation. Here the visitor gets a first impression of the intervention: a new window front placed in front of the old one with a grid of filigree metal rods extends over the entire ground floor.

As before, the building is divided into public uses on the ground floor, five floors of apartments and a semi-public roof terrace. The entrance situation with a characterizing canopy roof is complemented by attractive uses for the users of the building. A small cafe, a gym and the business center will be accessible directly from the entrance hall of the building.

The large existing building is characterized by a clear constructional logic. A staircase in the south-west corner of the building has so far provided access to the apartments through a long corridor. The functional floor plans of the regular storeys were developed around two inner courtyards. The redesign of the building will lead to an adjustment of the apartment sizes and the creation of various common seating areas. In addition, the weaknesses of the existing building are counteracted.

The new interpretation of the building focuses on the vertical and horizontal circulation and the patios, some of which were previously dark and unattractive. A high glass volume with subdivisions made of fine metal struts contains the lift and the stairs connecting all floors. The elegant vertical stair tower brings plenty of light into the corridors through its maximum transparency. A sequence of different seating areas, corridors, two patios filled with plants and small bridges surprise the visitor when entering one of the floors. On each floor the horizontal access path is designed differently and the route to the individual apartments is therefore individual. Partly the corridor is existing, partly the circulation area of the apartments runs directly over bridges crossing and intersecting the patio. The new circulation system allows a flexible adjustment of the apartment sizes and thus an efficient use of the floor space.

The new apartments are characterized by open structures. The apartments vary particularly in their orientation. A distinction is made between two types of apartments: Apartments facing the main facades to the north or east and apartments facing the patio. To bring as much light as possible into the patio apartments, the two patios are fully glazed on three sides. An interplay of transparent and opaque materials ensures the necessary privacy protection/screening. The apartment partition wall is dissolved, so that the patio is perceived as an extension of the light-flooded living space.

The new skin of the patios is designed in the same architectural language as the shop windows on the ground floor and the stair tower. Glass and fine metal rods in a regular grid extend up to the roof. The patios are covered by a pergola structure, which can be seen from the patios as a diamond pattern. The pergola is located on top of the building and offers protection from strong sun and rain for visitors to the roof terrace and the inner courtyards. The roof of the pergola appears as dynamic and elegant as the entire intervention. With its lightness and transparency, the new merges effortlessly with the old while remaining clearly legible. The new interior of the building is characterized by far-reaching and surprising visual relationships through the building and its patios, which in turn allows encounters between its inhabitants. 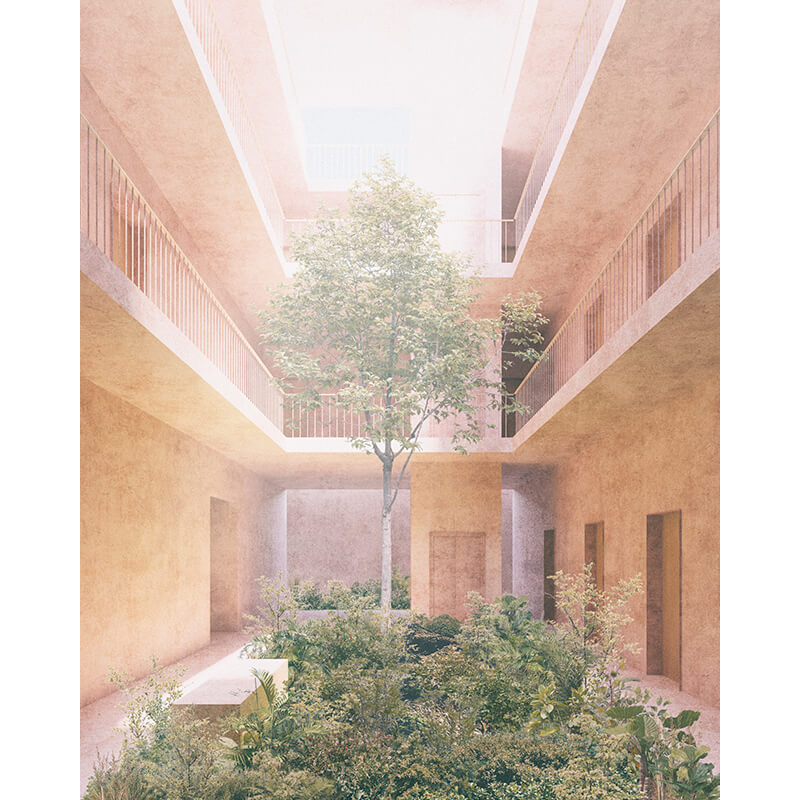 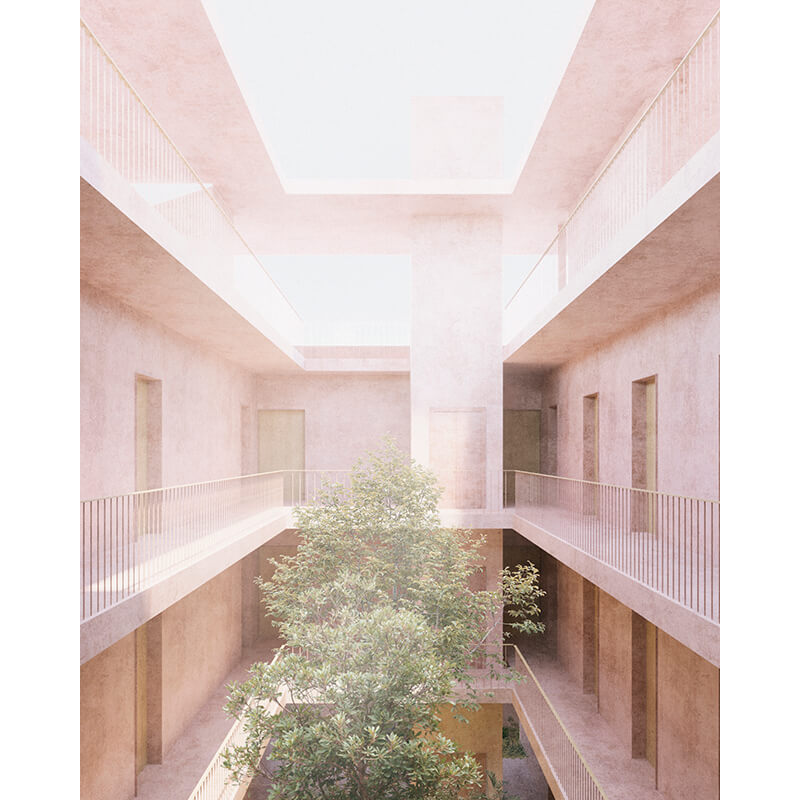 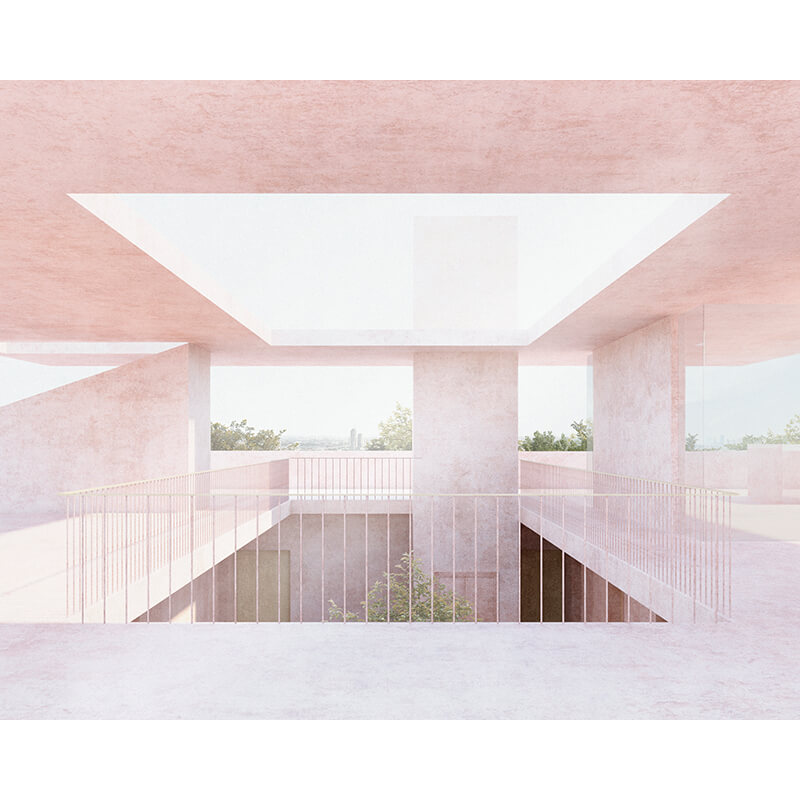 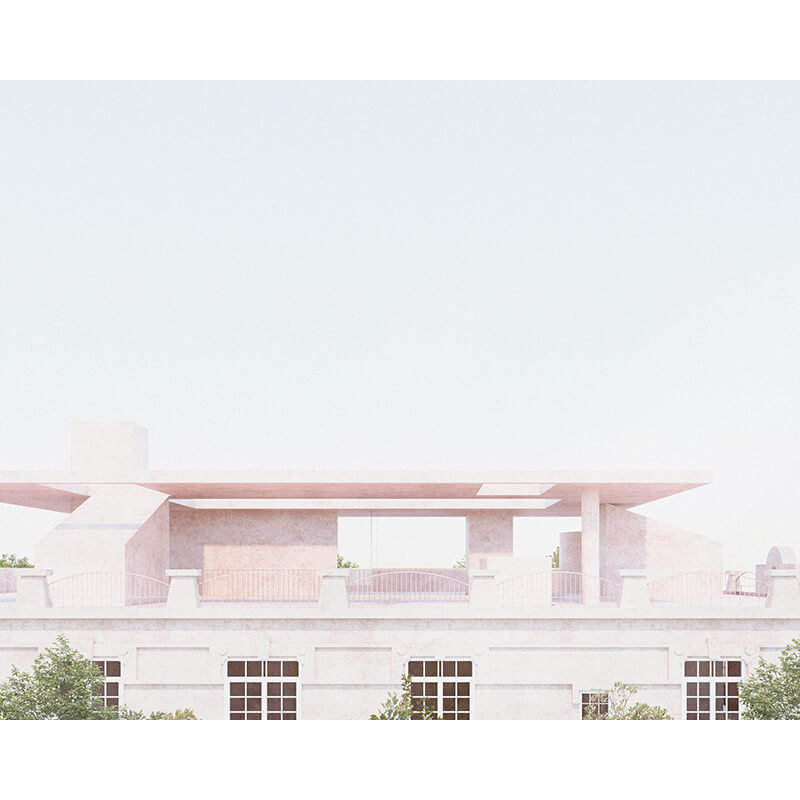 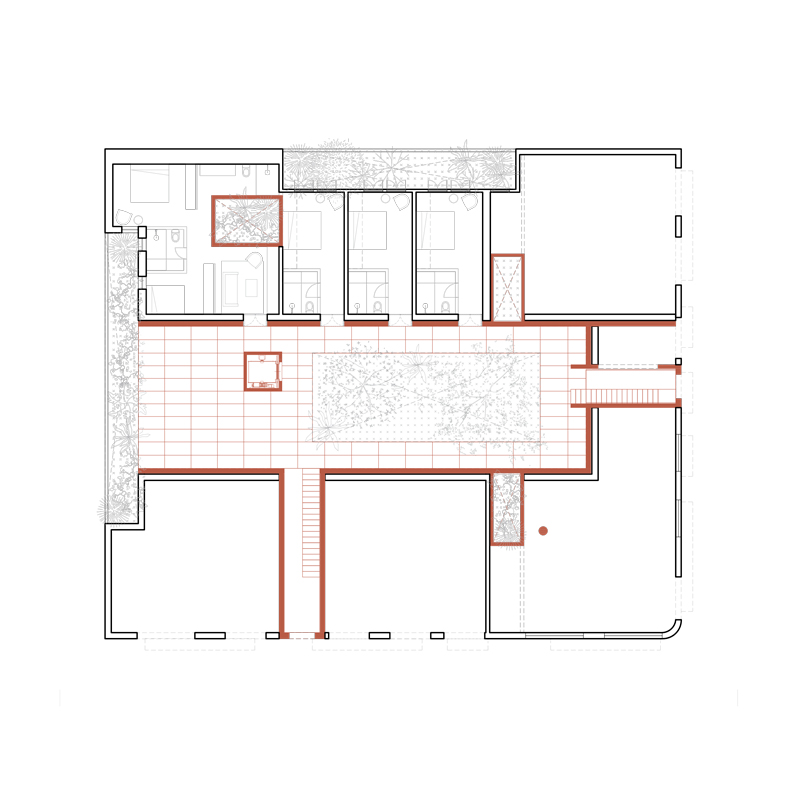 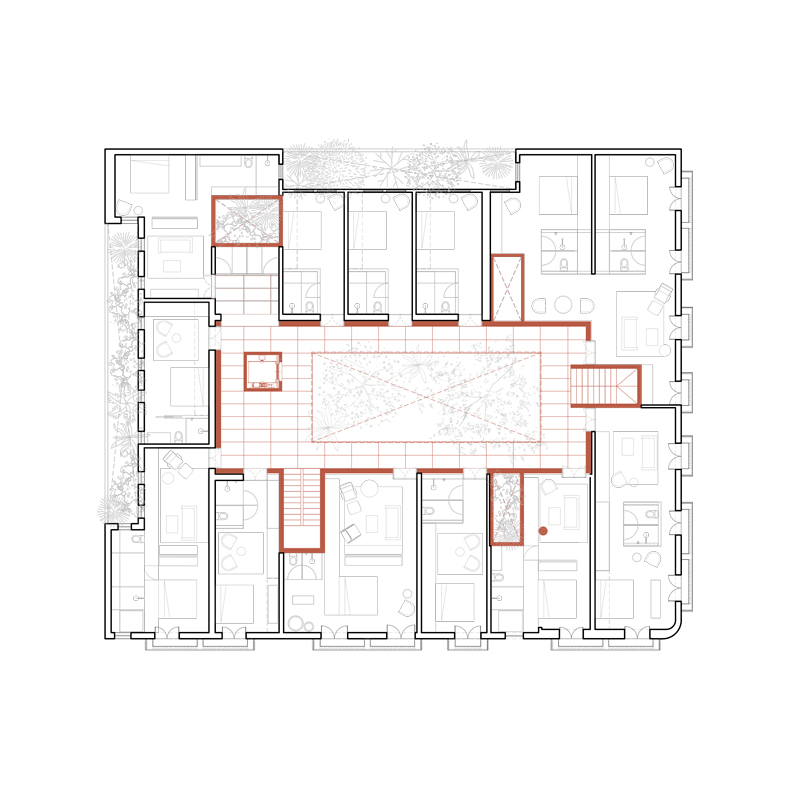 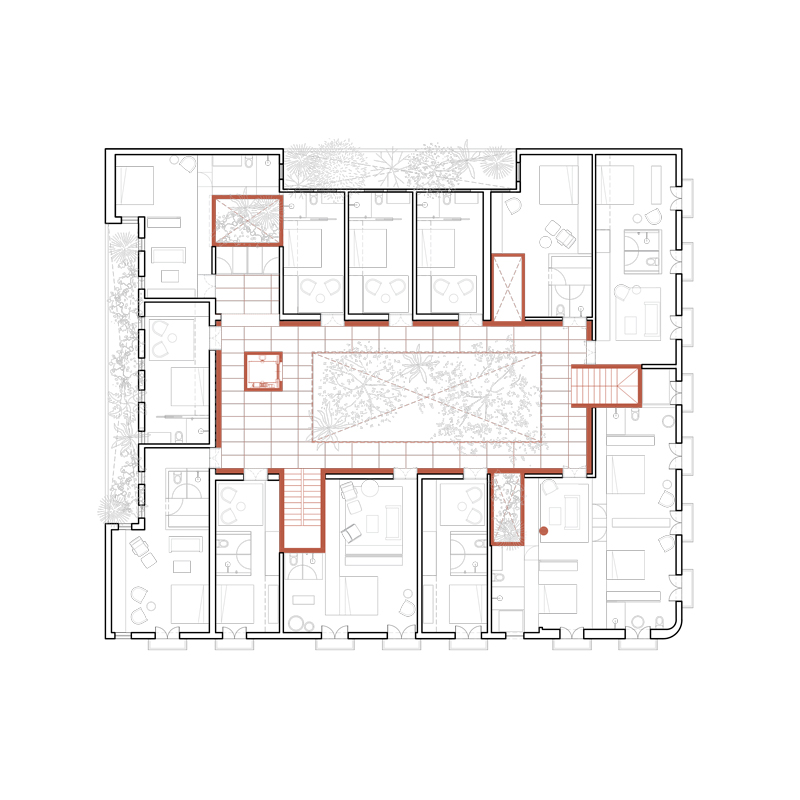 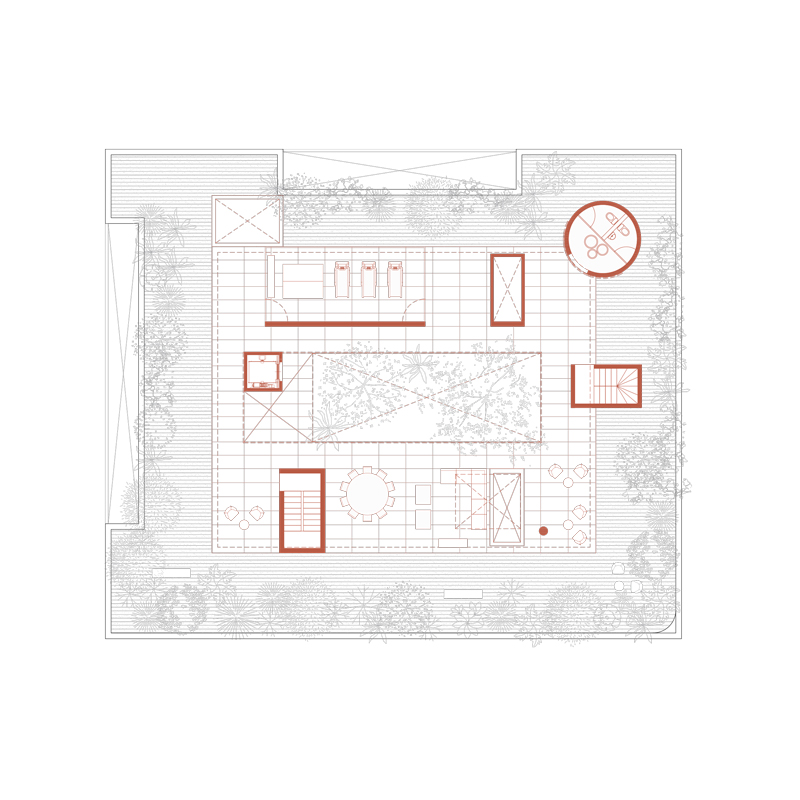 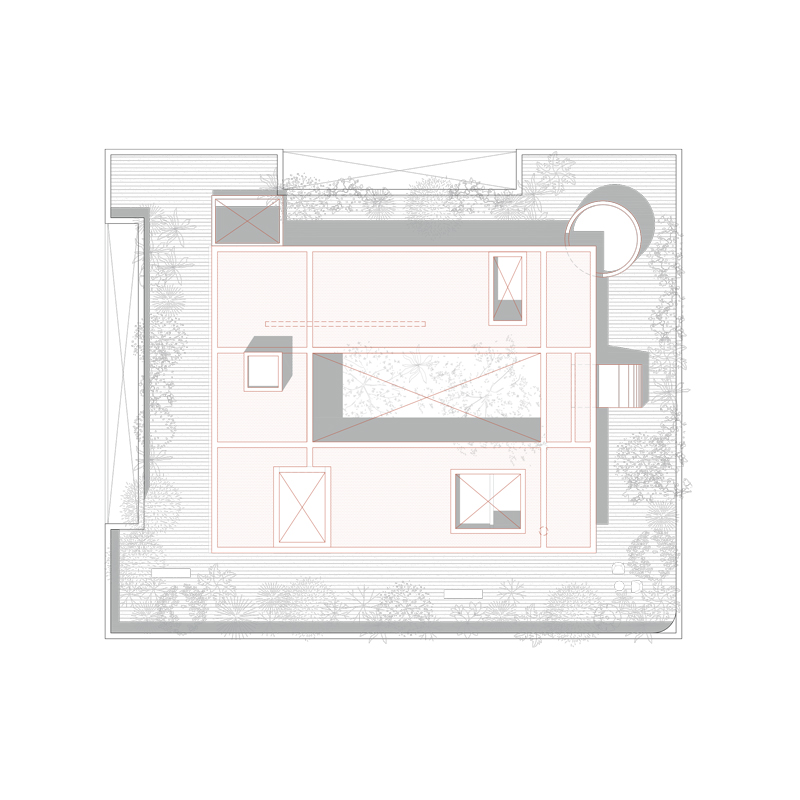 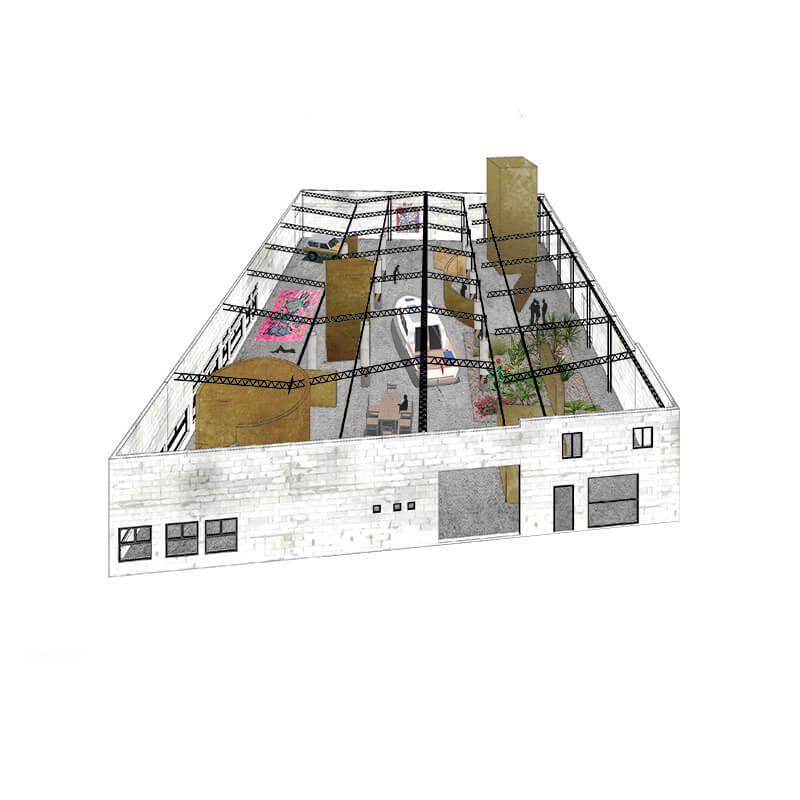 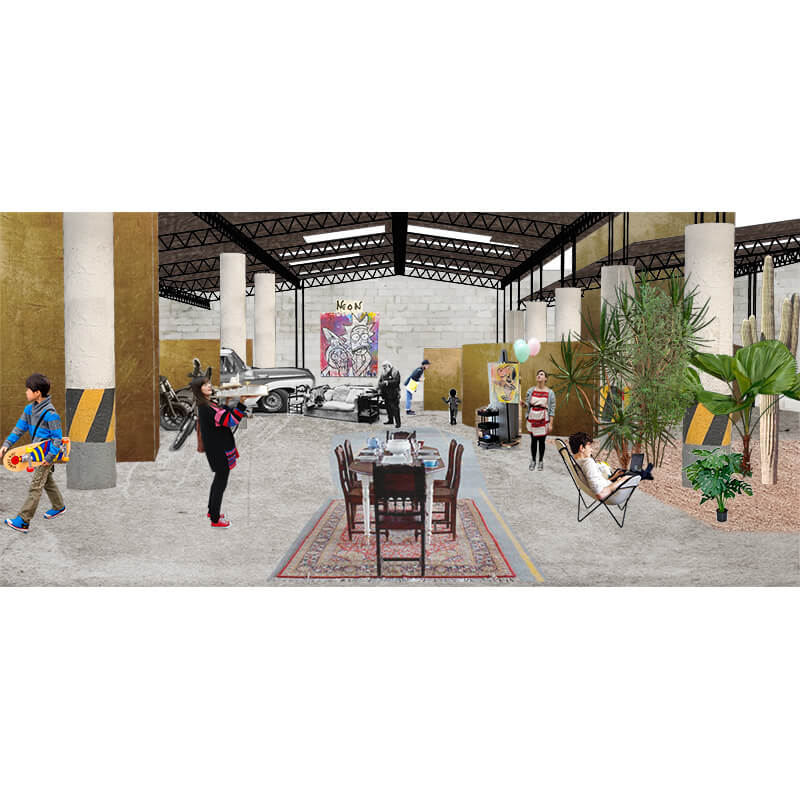 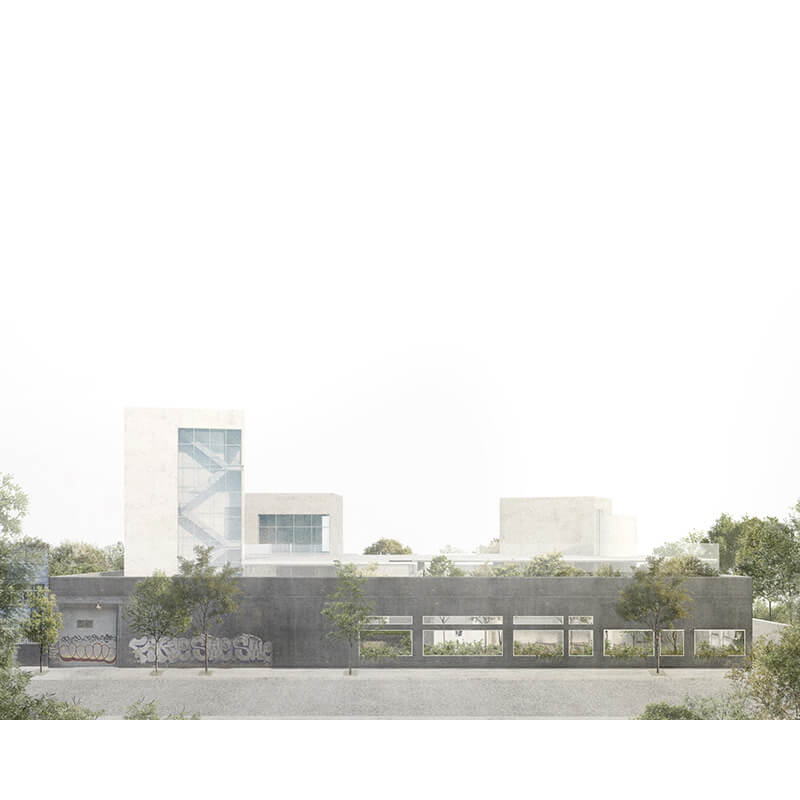 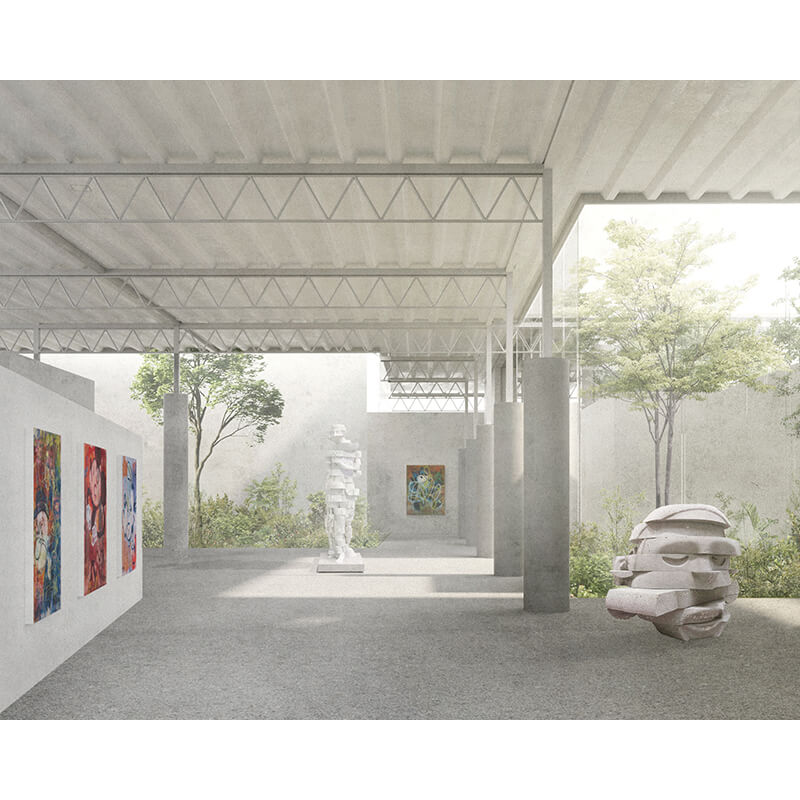 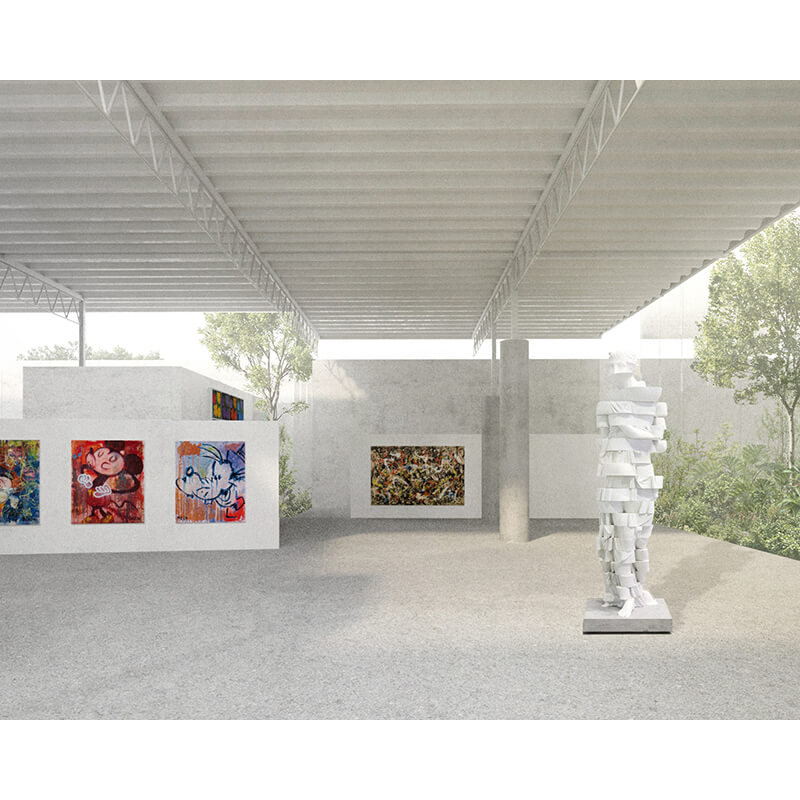 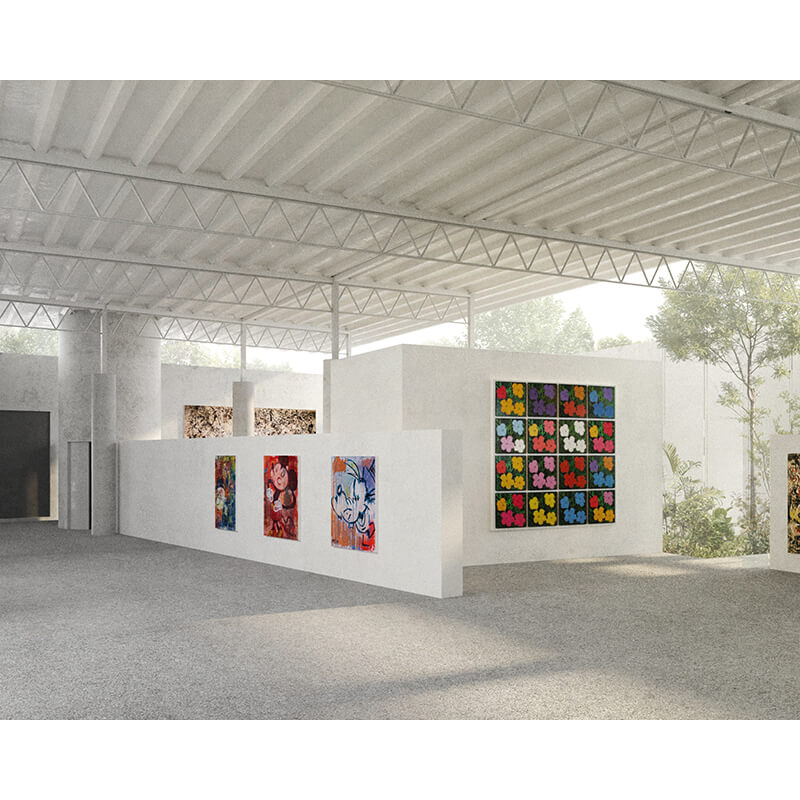 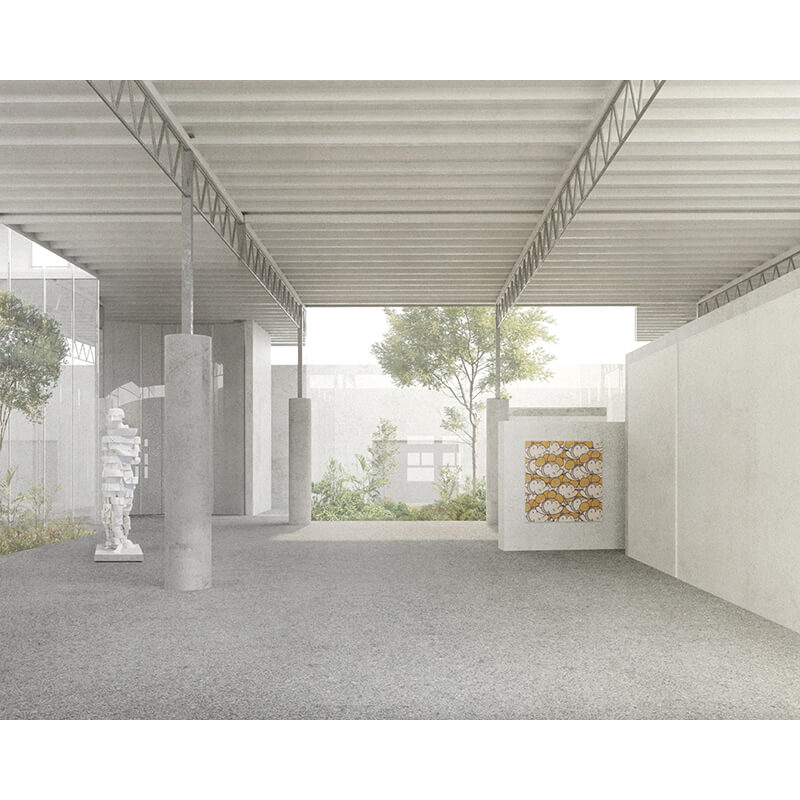 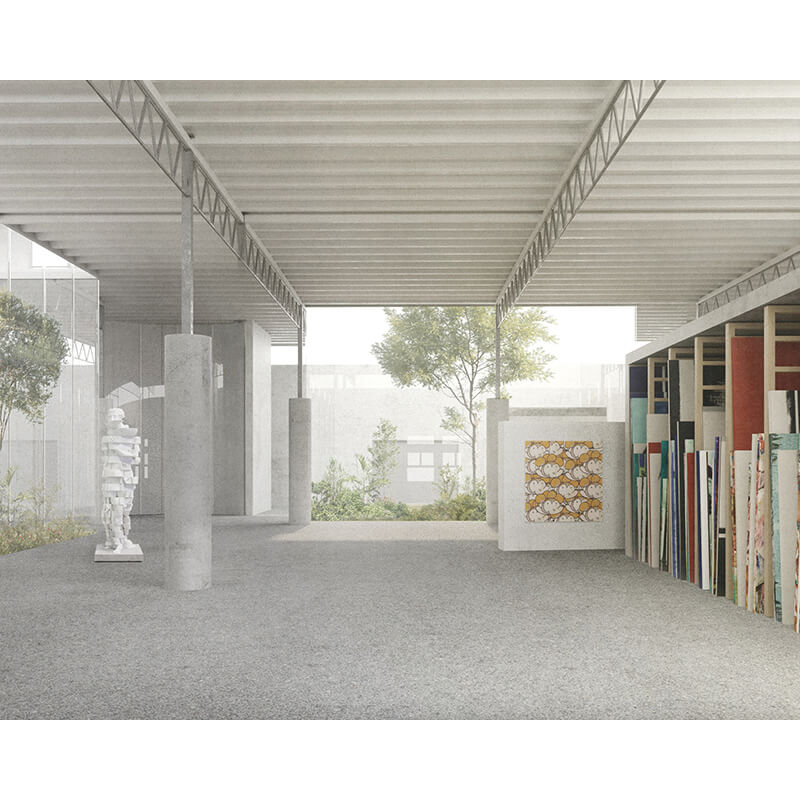 A car workshop in the Roma Sur is transformed into a working place for artists, suitable for hosting exhibitions, generate encounters and experiences with the community. The original structure of the industrial building, as well as the aesthetics of the building, are maintained and become more evident serving as a working base for the users. The architectural project is independent of the existing and is developed in its own language, creating a clear contrast between the new and the old. Playfull forms are introduced to flow with the space. The project is characterized by simple geometries and a dynamic composition of few pieces with specific programs: A configuration of different volumes, patios and independent walls are arranged in a dispersed formation allowing all kinds of interactions and actions to occur in the resulting intermediate areas. The spaces vary in proportion, shape and light conditions creating a highly flexible and adaptable project.